9 proposals for the visual arts

ADAGP represents the voice of authors to the public authorities and is committed to defending copyright with the government and parliamentarians through 9 proposals aimed at supporting artistic creation.

In a report dedicated to an overview of cultural and creative industries in France published in 2019, France Créative and EY found that in 2018, the visual arts sector generated €23.4 billion in revenues, making it the leading French cultural sector (ahead of music and cinema, which generated €9.7 and €3.8 billion in revenues respectively) (1).

However, recent studies show that public funding devoted to the visual arts is not always representative of the weight this sector has in the realm of culture. For example, in 2019, municipalities allocated only 2% of their cultural spending to the visual arts (2). In addition, visual artists do not benefit from the French social and income support mechanism (“intermittent du spectacle”) that protects other artists. The majority of companies in the visual arts
sector are very small, yet constitute an essential link in the chain of France’s cultural network throughout the country and they have been very strongly impacted by the Covid-19 pandemic and the resulting lockdowns. As the French say, the visual arts sector is the poor cousin of the “industry families” supported via the Government’s recovery plan, having been allocated only 13.1 million Euros, that is to say just 3% of the funds devoted to the recovery of the entire creative sector (3).

Therefore, more than ever, ADAGP is calling on the public authorities and has submitted proposals to support the French artistic scene, most of which are based on measures that have proven their worth in other cultural sectors and which would clearly also benefit creators in the visual arts sector.
-------
(1) France Créative and EY, The Mosaic Economy, 3 rd Panorama of Cultural and Creative Industries in
France, November 2019.
(2) Key figures for 2021, Statistiques de la culture et de la communication, French Ministry of
Culture, Department for Studies, Strategic Foresight and Statistics (DEPS).
(3) Information report issued by the Commission on Culture, Education and Communication on the
territorial distribution of resources allocated to creation, by Mmes Sonia de La Prôvoté and Sylvie
Roberto, Senators, registered with the Senate on November 3, 2021, p.11-12.

ENSURE ARTISTS HAVE THE WAYS AND MEANS TO CREATE

BY:
1. Effective application of the right to exhibit in public exhibition spaces.
2. Improvement of the contractual practices adopted by public institutions.
3. Encouragement for the creation of artists’ workshops and residencies in local communities.

BY:
4. Creation of a production and airtime obligation applicable to audiovisual programs devoted to
the visual arts.
5. Establishment of systems to encourage private and professional purchases of works by living
artists on the French scene.
6. Introduction of measures to support the development of art libraries (Artothèque).

FOSTER THE PROMOTION OF THE FRENCH ARTISTIC SCENE

BY:
7. Implementation of measures to encourage exhibitions with a majority of artists who are on the
French scene (distribution venues, press, etc.).
8. Creation of an automatic financing system for production on the French artistic scene via the
National Center for Visual Arts (Cnap)
9. Increasing the resources dedicated to promotion of the French artistic scene on the international
level.

History of news related to the subject 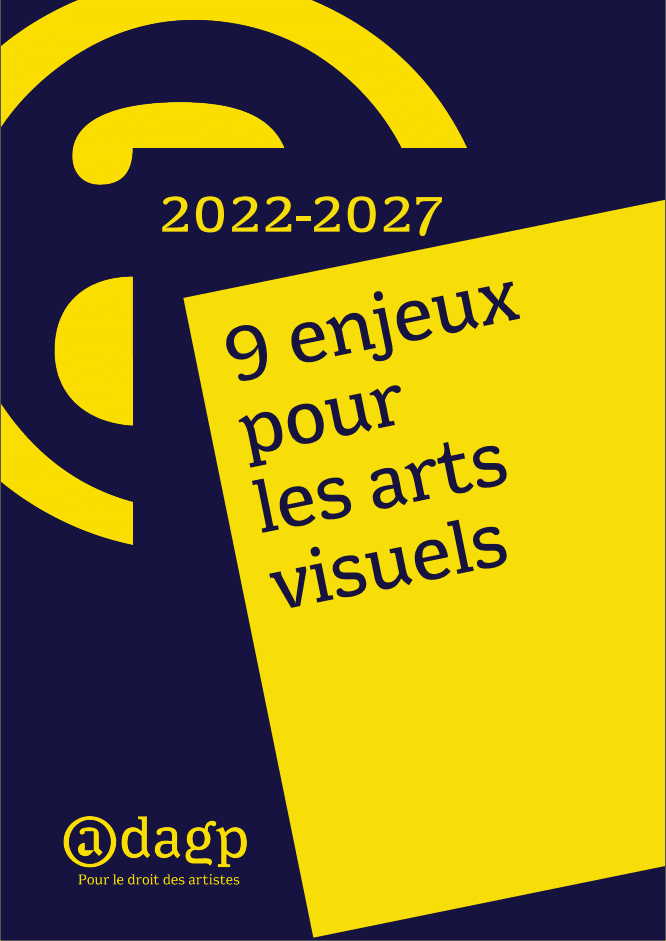 I am an artist or rightholder

I exploit or sell artistic works